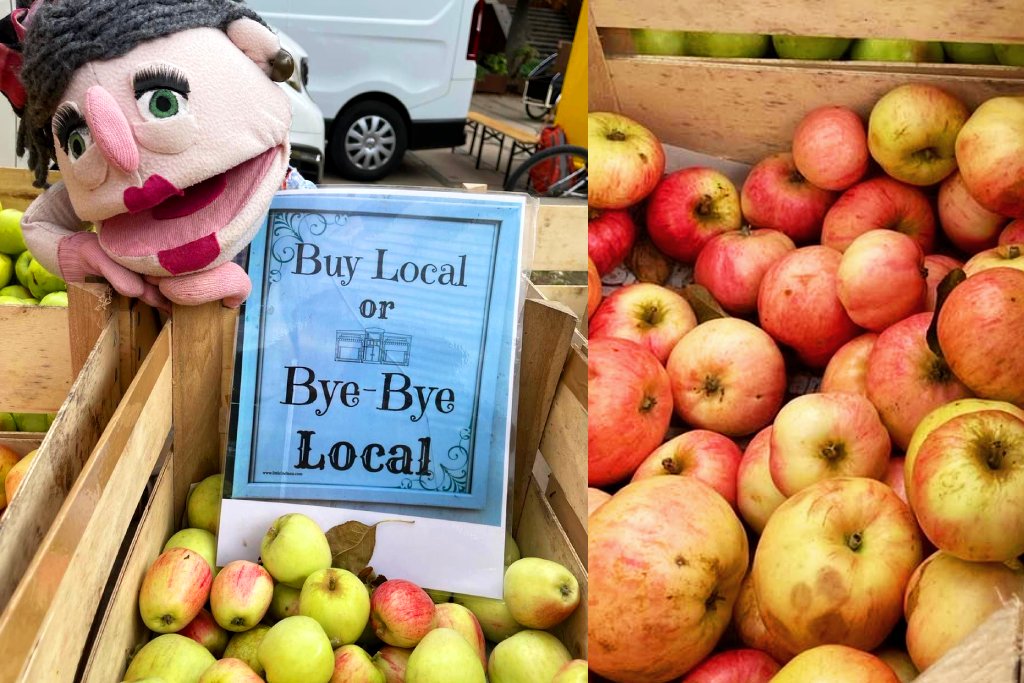 🍎💪 Grandma Sita knows that an apple a day keeps a doctor away! Apples are high in fibre, vitamin C, and various antioxidants. And apple season is here! Fresh, locally produced apples are at their best during the autumn months. Is anyone else up for the Farmers’ Market/Grønt Marked?
➡️ There are more than 7,500 known cultivars (cultivated varieties) of apples. Luckily, there are delicious apples from Denmark all year round. Let’s get to know this seasonal fruit!

An apple is a fruit produced by an apple tree (Malus domestic). Apple trees are cultivated worldwide and are the most widely grown species in the genus Malus. The tree originated in Central Asia, where its wild ancestor, Malus sieversii, is still found today. Apples have been grown for thousands of years in Asia and Europe and were brought to North America by European colonists. Apples have religious and mythological significance in many cultures, including Norse, Greek, and European Christian traditions.

Apples are high in fibre, vitamin C, and various antioxidants. They are also very filling, considering their low-calorie count. Studies show that eating apples can have multiple benefits for your health like helping to control blood sugar, and may protect against cancer, diabetes and heart diseases.

Nutrition information for major nutrients of 100g of apples

Before you think about choosing an apple tree for your garden, it is important to consider whether apples are right for your area. The wide variety of apples means that there are suitable varieties for most temperate climate gardens. However, apple trees will need to be provided with suitable conditions in order to grow well.

Finding apples in the autumn season should not be a problem 😊 It is the best time to pick the ripest and juiciest apples and they might be growing closer to you than you think! To check where is the closest garden and trees, please click below:

📢 A study by WRAP, shows that UK households waste an average of 190,000 tonnes of apples each year, making the fruit rank third, just after potatoes (1) and bread (2), in the quantity of food wasted.

There is not really an end to what can be done with apples: juice, raw in salads, baked in pies, cooked into sauces and spreads like apple butter, and other baked dishes, as an ingredient in savoury foods, such as sausage and stuffing.

♻️ The cores and the peels from the apples are edible. You can use the peel in salads or crisp it in the oven with a little cinnamon to make tasty chips. And the core shouldn’t be wasted either that can be pulped or simmered in water, then cooled to make a fibre-rich juice drink.

Apples contain a compound called amygdalin in their seeds, which is a cyanide-and-sugar-based molecule. The consumption of the seed in extremely large doses could cause adverse reactions. Source: gardeningknowhow.com