WHY IS THE BEACH FULL OF STONES IN BRIGHTON, UNITED KINGDOM? 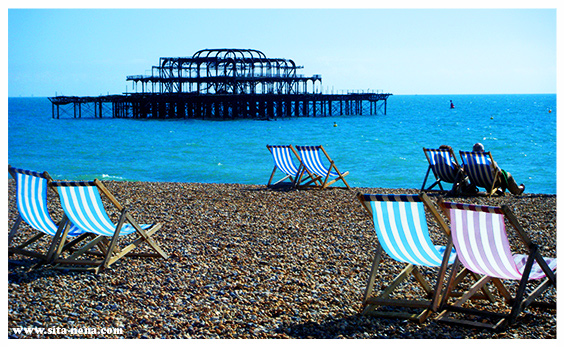 Short story for children written by Elena JR. Dedicated to Helia and Iris, my nieces, and all the little ones and not-so-little ones who live in the city of Brighton & Hove, United Kingdom.

WHY IS THE BEACH FULL OF STONES IN BRIGHTON, UNITED KINGDOM?

Once upon a time, there was a city in the south of England called Brighton. This city was really well known because of its beautiful beaches, with white and fine sand. Families from everywhere came to Brighton to spend their holidays enjoying the sun and the beach.

But one day, the weatherman said that the worst, most dangerous storm ever would come to Brighton…  Just in case, everybody who was living in Brighton at that time went up to the hills (Hanover and Seven dials) for the duration of the storm, in order to save themselves.

Indeed, the terrible storm came to Brighton, with huge waves as big as the hotels on the seafront and even higher. The storm lasted almost three days and there was no electricity in the whole city. But after the storm, there is always calm.

The sky was clear and the sun shone. This meant it was the end of the storm. Hooray! So, instinctively, all the people of Brighton, even the kids and grannies, started to walk back down from the hills to the beach. But…

Oh my God! They were so surprised when they realized there wasn’t any sand on the beach anymore. Maybe the sea ate all the sand because it was really hungry from the storm! So the long seafront of  Brighton was completely empty of sand and everybody, even the dogs and cats, was really sad… Where are they going to put their towels now?

Then, everybody along the seafront stood like statues and watch the sea. Hour by hour it was getting dark and finally, night fell… And the magic moment started. A pretty, huge moon appeared. The moonlight was lighting the sea like an enormous lightbulb. The sea was a huge mirror in which all the people from Brighton were reflected.

Suddenly, one by one, every star in the sky began to shine. Every time a star shone, it was reflected in the huge mirror, and every time a star shone one person on the seafront was illuminated and shone at the same time… Oh my God! This meant that each inhabitant of  Brighton had their own star shining in the sky.  That moment was very magical and beautiful! Everybody along the seafront was again standing like a statue and watching the sea. Hour by hour, it was getting light and finally daylight came…

This was another magic moment. When the sun’s rays touched the stars that were reflected in the mirror, the stars became stones of different colours, sizes and shapes and the mirror between the stones dissolved. In the meantime, the sea was scary and the waves went back to the deep. And so from on, the sea at Brighton beach looked like a calm pool and stayed like that forever after.

So the whole beach from Brighton to Hove was full of stones and, as we know now, there are no two stones alike on the beach. Each stone is unique because it represents the reflection of the star that represented the different people who live in Brighton. For that reason, please don´t throw stones. Who knows, maybe that stone is your neighbour, the bus driver, your teacher or your sister!

Oops! I mustn’t forget to tell you a secret: If you want to listen to this story as is narrated by a real stone, just go to Brighton beach, choose one, put it really near to your ear and wait….

Brighton has a 5.4-mile (8.7 km) expanse of shingle beach, part of the unbroken 8-mile (13 km) section within the city limits. The seafront has bars, restaurants, nightclubs, sports facilities and amusement arcades, principally along the central section between the West and Palace Piers. | Source: Wikipedia & Location on Google Maps: Brighton, United Kingdom