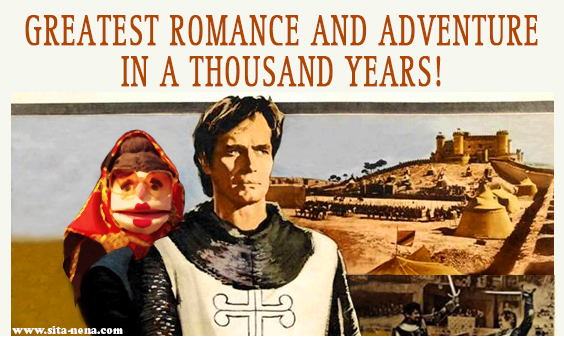 Greatest romance and adventure in a thousand years🥰❤️🥰

The Belmonte Castle has been an incomparable setting for El Cid, film directed by Anthony Mann, 1961. It is a medieval castle on the hill of San Cristobal, just outside the village of Belmonte in La Mancha, Spain. It was declared a historic monument within the National Artistic Treasury by a decree of 3 June 1931 and is now a Bien de Interés Cultural. Source: wikipedia

El Cid is a 1961 epic historical drama film that romanticizes the life of the Christian Castilian knight Don Rodrigo Díaz de Vivar, called “El Cid” (from the Arabic as-sidi, meaning “The Lord”), who, in the 11th century, fought the North African Almoravides and ultimately contributed to the unification of Spain. The film stars Charlton Heston in the title role and Sophia Loren as Doña Ximena. El Cid was shot mostly on location in Spain (the Castle of Belmonte appears as Calahorra) but a few studio scenes were shot in Rome, to achieve co-production status. Director Martin Scorsese, called El Cid  “one of the greatest epic films ever made.” | Source: wikipedia

The Belmonte Castle offers visitors a cultural visit along the history of the monument from the fifteenth century to the present. In addition to many activities throughout the year.

The Castle of Belmonte was built in the second half of the 15th century by order of Don Juan Pacheco, first Marquis de Villena, during a time of convulsions and infighting in the Kingdom of Castille and so Pacheco wished to build up his territory and build forts around it before worse problems arose. The fortress was practically abandoned between the 17th and 18th centuries and was more or less ruinous by the early 19th century. The heiress of the house of Villena, Eugenia de Guzmán, better known as the Empress Eugenia de Montijo and her architect Alejandro Sureda began a restoration project in 1857, keeping the exterior in the original style but updating the interior to modern tastes.
The castle was then occupied as French Dominican monastery for several year. After the Dominicans left, the empress’ great-nephew the Duke of Penaranda, Hernando Fitz-James Stuart e Falco continued the restoration and even lived within the castle. It later served as a prison for the Partido Judicial de Belmonte, and as a Onésimo Redondo academy for the Francoist ‘Frente de Juventudes’. It was abandoned and began to deteriorate again, before being made a cultural monument in 1931. It is now owned by the descendents of the empress’ sister Maria Francisca de Sales Portocarrero. It was restored again in summer 2010 and opened to the public. | Source: wikipedia

MUSSEL FARMS OF GALICIA, SPAIN
ONCE UPON A TIME IN PRAGUE, CZECH REPUBLIC