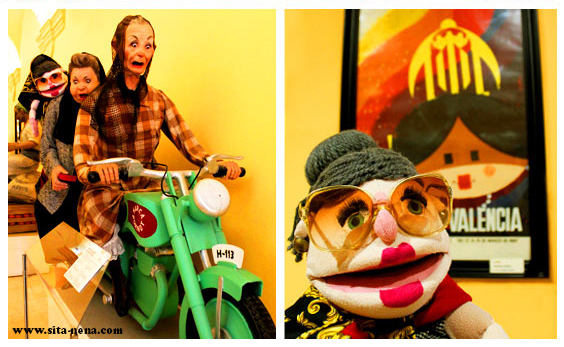 Fallas Museum of  Valencia (Spanish: Museo Fallero de Valencia; Valencian: Museu Faller) is settled, since 1971, in a former convent of the mission house of San Vicente de Paül, which was finished in 1831, which is why it retains part of the original structure, corridors and old cells included. Fallas Museum´s collection contains different works, divided into “pardoned ninots” (Valencian: ninot, meaning “puppet or doll” ), “infantile ninots”, winning and finalists posters of Fallas, portraits of Falleras Mayores and historical insignia of Comisiones Falleras.

The Fallas (Spanish: Fallas; Valencian: Falles) is a traditional celebration held in commemoration of Saint Joseph in the city of Valencia, Spain. The term Falles refers to both the celebration and the monuments burnt during the celebration. The Falles festival was added to UNESCO’s intangible cultural heritage of humanity list on 30 November 2016.

The ninots and their falles are constructed according to an agreed-upon theme that has traditionally been a satirical jab at whatever draws the attention of the fallers. Formerly, much time would be spent by the casal faller preparing the ninots. During the four days leading up to 19 March, each group takes its ninot out for a grand parade, and then mounts it, each on its own elaborate firecracker-filled cardboard and paper-mâché artistic monument in a street of the given neighbourhood. Source: wikipedia

Joaquín Sorolla y Bastida (Valencia, 27 February 1863 – Cercedilla, 10 August 1923) was a Spanish painter. Sorolla excelled in the painting of portraits, landscapes, and monumental works of social and historical themes. His most typical works are characterized by a dexterous representation of the people and landscape under the bright sunlight of his native land and sunlit water. Source: wikipedia

There are different conjectures regarding the origin of the Falles festival. One suggests that the Falles started in the Middle Ages, when artisans disposed of the broken artefacts and pieces of wood they saved during the winter by burning them to celebrate the spring equinox. Valencian carpenters used planks of wood called parots to hang their candles on during the winter, as these were needed to provide light to work by. With the coming of the spring, they were no longer necessary, so they were burned.

Over time, and with the intervention of the Church, the date of the burning of these parots was made to coincide with the celebration of the festival of  Saint Joseph, the patron saint of carpenters.This tradition continued to evolve. The parot was dressed with clothing so that it looked like a person; features identifiable with some well-known person from the neighbourhood were often added as well. To collect these materials, children went from house to house asking for una estoreta velleta (an old rug) to add to the parot. This became a popular song that the children sang as they gathered all sorts of old flammable furniture and utensils to burn in the bonfire with the parot. These parots were the first ninots.

Over the years, people of the neighbourhoods began to organise the building of the falles, and thus the typically intricate constructions, including their various figures, were born. Each neighbourhood of the city has an organised group of people, the Casal faller, that works all year long holding fundraising parties and dinners, usually featuring the noted dish, paella, a specialty of the region. Each casal faller produces a construction known as a falla which is eventually burnt. | Source: wikipedia