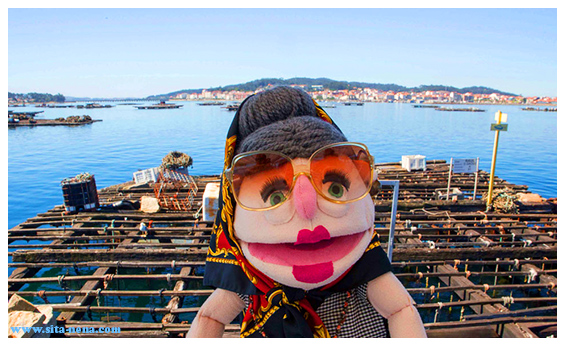 Best way to know mussels from Galicia (mexillón in Galician) is tasting them on a boat trip around the floating rafts (batea in Galician), type of mussel farms – aquaculture. Get ready to enjoy with Granma Sita the flavours of the sea 😋

Everyone aboard! The tour around mussel farms was created because of the importance of the Galician seafood industry,  specially mussel sector. Mussels are farmed here by means of a floating raft culture. Rafts are pretty big with lines of rope where young mussels are seeded. Awesome the underwater view of the lines of mussels, some algae and little fish swimming around.

Mussel is the common name used for members of several families of clams or bivalve molluscs, from saltwater and freshwater habitats. These groups have in common a shell whose outline is elongated and asymmetrical compared with other edible clams, which are often more or less rounded or oval. Mussels grow quickly and are usually ready for harvest in less than two years. Unlike other cultured bivalves, mussels use byssus threads (beard) to attach themselves to any firm substrate, which makes them suitable for a number of culture methods. | Source: wikipedia

Raft culture is a commonly used method throughout the world (traditionally practiced in Galicia, North West Spain ). Lines of rope mesh socks are seeded with young mussels and suspended vertically from a raft. The specific length of the socks depends on depth and food availability.  The Galician mussel sector is based on nearly 3300 installed floating rafts in the five “rías” (Vigo, Pontevedra, Arousa, Muros, Ares). These ría waters are blessed with an extraordinary quality for the farming of mussels due to their warmth and the high amount of nutrients which they contain. Moreover, the rías are ocean areas that are protected from severe weather conditions, which is why the mussel farms are resistant to the changing maritime weather. The Galician mussel production has surpassed 200,000 tonnes annually. Consequently, we are talking about one of the largest mussel producers in the world. | Source: wikiepdia

WHY IS THE BEACH FULL OF STONES IN BRIGHTON, UNITED KINGDOM?
EL CID (FILM): BELMONTE CASTLE IN LA MANCHA, SPAIN