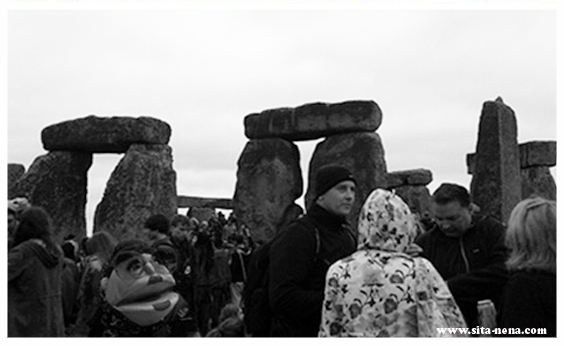 You’ve made your guess, Grandma Sita is at Stonehenge on the Summer Solstice ☀ best time to experience the magic ✨ of this prehistoric monument is during the sunrise…😍 Solstice is actually one of the rare occasions that visitors are allowed to enter the stone circle which has been a place of worship and celebration for thousands of years!!!

Stonehenge is regarded as a British cultural icon. One of the most famous landmarks in the UK is Stonehenge. The site and its surroundings were added to UNESCO’s list of World Heritage Sites in 1986. Stonehenge is owned by the Crown and managed by English Heritage; the surrounding land is owned by the National Trust.  Visitors are able to walk around the monument from a short distance away. English Heritage does, however, permit access during the summer and winter solstice, and the spring and autumn equinox. Additionally, visitors can make special bookings to access the stones throughout the year. | Source: English Heritage

Stonehenge is a prehistoric monument in Wiltshire, England, 2 miles (3 km) west of Amesbury. It consists of a ring of standing stones, with each standing stone around 13 feet (4.0 m) high, 7 feet (2.1 m) wide and weighing around 25 tons. The stones are set within earthworks in the middle of the densest complex of Neolithic and Bronze Age monuments in England, including several hundred burial mounds. It could have been a burial ground from its earliest beginnings. Deposits containing human bone date from as early as 3000 BC, when the ditch and bank were first dug, and continued for at least another five hundred years. | Source: Wikipedia

WINDMILLS OF LA MANCHA, SPAIN
WHY IS THE BEACH FULL OF STONES IN BRIGHTON, UNITED KINGDOM?