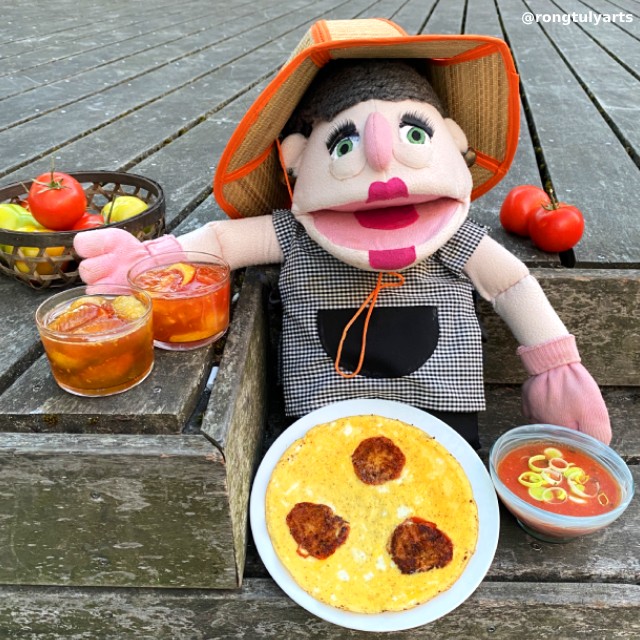 1. Scald rice by placing in a sieve and pouring boiling water over it.
2. Pour the rice into a pot, add water with salt, bring to a boil and simmer until rice is tender as for a soft porridge.
3. Boil the tomatoes with 2 onions until soup texture.
4. Then pour the rice porridge and tomato soup together on the sieve and forcefully rub it through the holes on the surface of the sieve, meanwhile resulted liquid is pouring into a pot.
5. Put the pot over the fire, add paprika powder,  finely chopped parsley and salt, to taste.
6. Turn up the heat as high as it will go and wait until everything is boiling, then turn the heat down to low again and cook gently, stirring a couple of times.
7. Add fish balls, ball dumplings (flour) or thin slices of leeks to cook into the tomato soup.

1. Cut tomato into slices. Beat an egg, a tablespoon milk and a pinch of salt
into a bowl. Dip slices of tomato into the beaten egg. Then, coat them with the breadcrumbs. Heat butter in a small saucepan. Fry them, until golden brown for each side.
2. Pour egg mix beated over fried slices of tomato, wait a bit until it curdles and flip omelet over with a plate. Slide the other side of omelet into the pan and again wait a bit until it curdle. Flip again if it is necessary. This omelet must be well done on both sides.

1. The tomatoes are poured over with boiling water, peeled and cut into pieces. The apples are peeled and cut into slightly smaller pieces than the tomatoes. The lemons are washed, divided into four parts lengthwise and then cut into very thin slices across.
2. All the fruit is mixed and boiled under a lid over low heat until tender, after which the sugar is added. The jam is now boiled approx. 10 minutes without lid. The gelling agent is added according to the instructions for use.
3. Pour the jam into glass. Put a lid on the glass immediately.