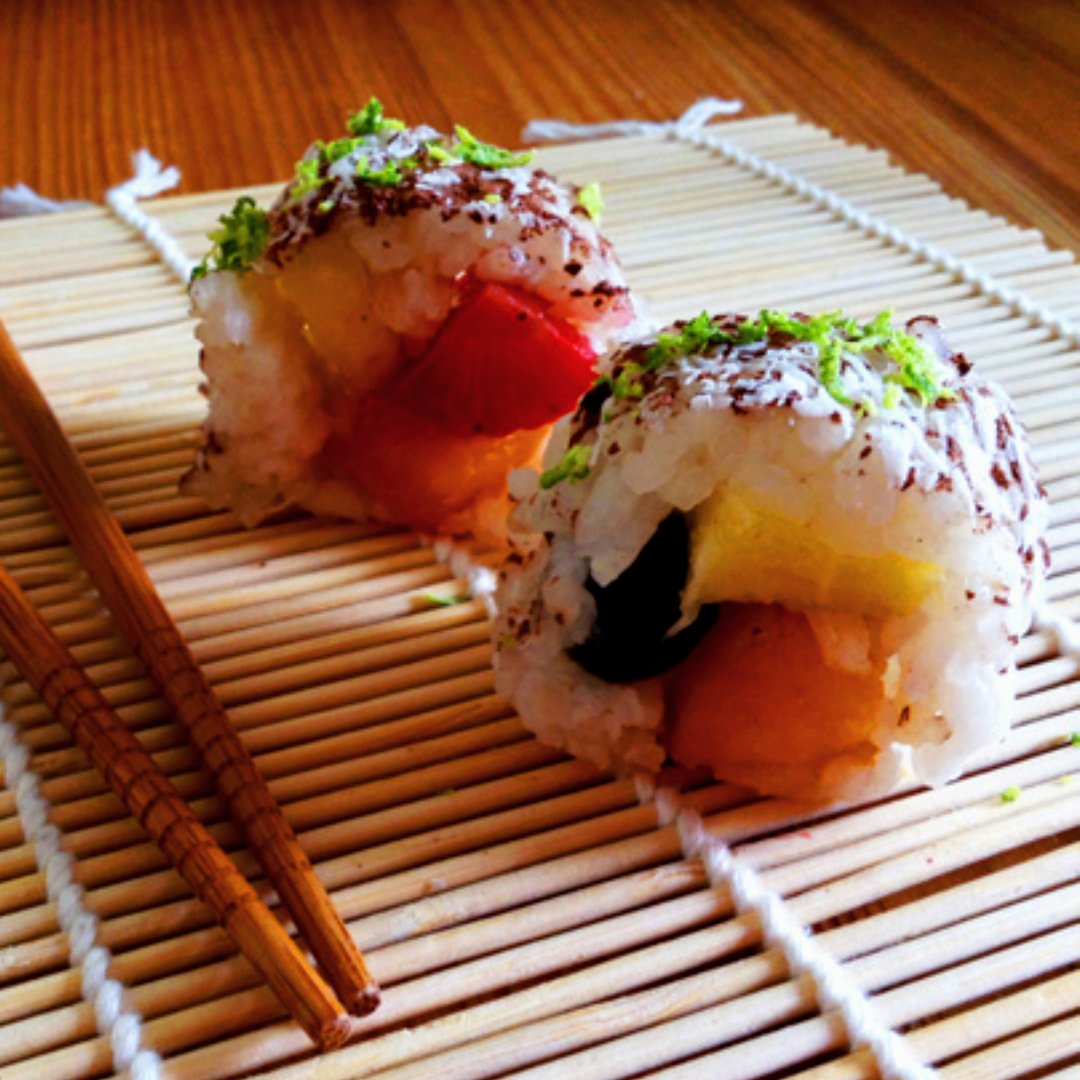 🍣 Grandma Sita’s frushi is a plant-based recipe fun to do with kids, and it even helps you to clear out fruit from the fruit bowl. She gave frushi a special twist by adding brown bananas to the frushi roll. Win-win!

♻️🚜 Grandma Sita’s frushi depends on seasonal fruit, that’s why there are lots of tasty combinations and you can enjoy it any time of the year. Grandma Sita’s sustainable cuisine is always tasty and cooked from scratch with love 💚

🍌  Did you know that brown (overripe) bananas are a fantastic ingredient?  Grandma Sita has put together her best plant-based recipe ideas for you to try. Check it out here

I. RICE PUDDING (frushi special)
1. Wash and rub well the rice under the tap. Probably change the water around eight times to make sure that the rice is cleaned and ready to cook.
2. Put the veggie drink in a saucepan and warm it gently. When it is warm, add the brown sugar, cinnamon stick, and lemon/lime zest.
3. Stir until it’s all melted (the consistency of a soup). Wait until the mixed liquid begins to boil and add the rice.
4. Leave it to simmer, as slowly as you can, until the rice is well done. Be sure to stir occasionally to prevent sticking on the bottom of the pan.
5. The rice will take about 25-35 minutes or so in being well tender. Try it before removing it, and if the grain is quite tender, remove the lemon peel and cinnamon sticks and let it rest a little.
6. Stir the rice with a wooden spoon and let warm/cool it. The rice is ready to roll.
II. FRUSHI ROLL
7. Mash the cooked rice (a kind of rice pudding) with the banana.
8. Lay out the plastic wrap and spread the rice mixture on top of the plastic. You will want the rice to be roughly the depth of the tip of your pinky finger. Try to spread the rice in a rectangular shape. Use a Sushi map if it´s possible.
9. Cut into pieces the fruits: strawberries, apricots, blackberries, and pineapple. Layer the pieces of fruits in a neat, tight row on one side of your rice rectangle.
10. Pull one side of the plastic wrap up and gently roll the frushi together. Stick the roll into the freezer for two hours to help solidify the rice.
11. After a couple of hours, when the frushi is ready, then take it out of the freezer. Unwrap the cling film and sprinkle it with ground cinnamon, grated dark chocolate, and grated lime zest.
12. Cut the frushi into short slices.
13. Serve frushi slices on a sushi plate with chopsticks and a small bowl of maple or agave syrup to dip.

The original type of sushi was first developed in Southeast Asia and spread to south China (before being introduced to Japan sometime around the 8th century) as a means of preserving fish in fermented rice. In the Muromachi period, people began to eat rice as well as fish. During the Edo period, vinegar rather than Lacto-fermentation was used to sour the rice. In modern times, it is an early form of fast food strongly associated with Japanese culture. The term sushi comes from an antiquated grammatical form no longer used in other contexts, and literally means “sour-tasting”; the overall dish has a sour and umami or savory taste. Narezushi is still made in Japan to this day. | wikipedia.org