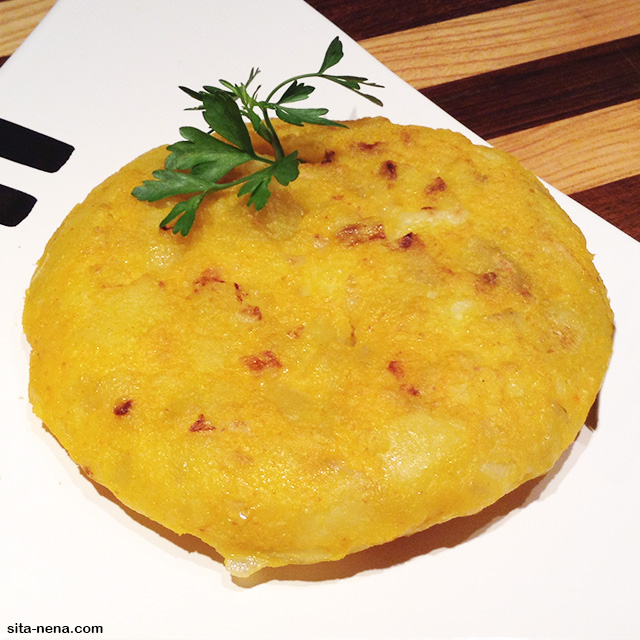 2 large potatoes or 4 small potatoes
A quarter of an onion, to taste
A bunch of leftover bread (also called day-old, stale bread)
Olive oil (or any vegetable oil)
Salt, to taste

*Note: This is a recipe for a small size omelet.

1. Peel and chop the potatoes and the onion.
2. Mix chopped potatoes and onion  into a bowl. Add salt, to taste.
3. Fry the potatoes and onion until soft. Remove with a skimmer and put into a strainer.
4. Put pieces of stale bread in water to soak.
5. Drain the bread, put it into the blender container, add some water and mix with a blender till obtain liquid texture similar to eggs beaten.
6. Add the liquid mixture of bread and water to the fried potatoes and onion. Mix everything together.
7. Put the mixture in a small hot pan with a splash of  olive oil, wait a bit until it curdles and turn it over with a plate.
8.Slide the other side of the tortilla into the pan and wait a bit until it curdle. Turn again if it is necessary. Then the tortilla is ready to eat.
Our note: You can turn it as many times as you like, until the tortilla is well cooked.
9. Serve a piece of Spanish omelet or make a Spanish omelet sandwich. Both are delicious ways to eat Spanish omelet.