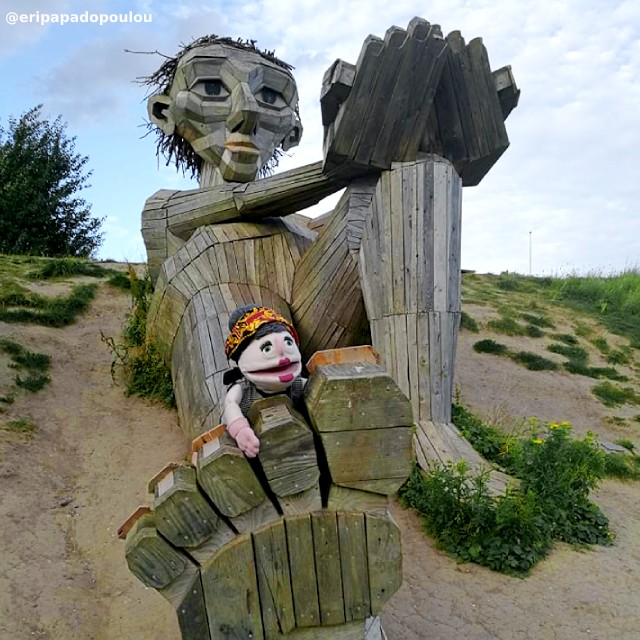 Have you ever looking for treasure hunting? Grandma Sita meets some cute giants made from scrap wood by the artist Thomas Dambo, who wanted to bring the story of the forgotten giants to little people.  😉

➡️ Thomas Dambo is an artist/musician, who through his arts and creation, wants to inspire everyone to think of trash as a treasure and resource for the future. ♻️🌎

🤔 Did you know? These giants tell a story of seven friends who used to live in the forest and led a simple life, but they saw how the little people destroyed the future in the name of civilization. That’s why they decided to help mankind to realise that there are more things than civilisation and all beings are one in the soul. So when the giants built the tower, the little people came to visit them, with a hope to see beyond forest and nature, that there will be a future for all.

🤓 Read more about it 💚👉 The Six Forgotten Giants

Hill Top Trine // Grandma Sita was resting on top of a little hill in Hvidovre, Copenhagen. She crawled into the palms of her hands and got a beautiful viewpoint overlooking Avedøresletten. Hill Top Trine is named after one of the volunteers who worked on one of the other hidden giants.

Sleeping Louis // Louis was taking a nap on a hill, covered in trees and nature, in a secret place in Rødovre outside of Copenhagen. Grandma Sita crawled into his gaping mouth, and played inside him!

There are four more giants, named Teddy Friendly, Oscar Under the Bridge, Little Tilde and Thomas on the Mountain. There are also ten troll sculptures in secret locations around Denmark. The project is called “The Journey to The Giant Troldefolkefest.”

Thomas Dambo born in Odense, Denmark in 1979. He is a danish artist/musician with a master in design, who works to create art and useful things of old thrown away materials. | Source: thomasdambo.com