EAT GRIM, not as ugly as you think 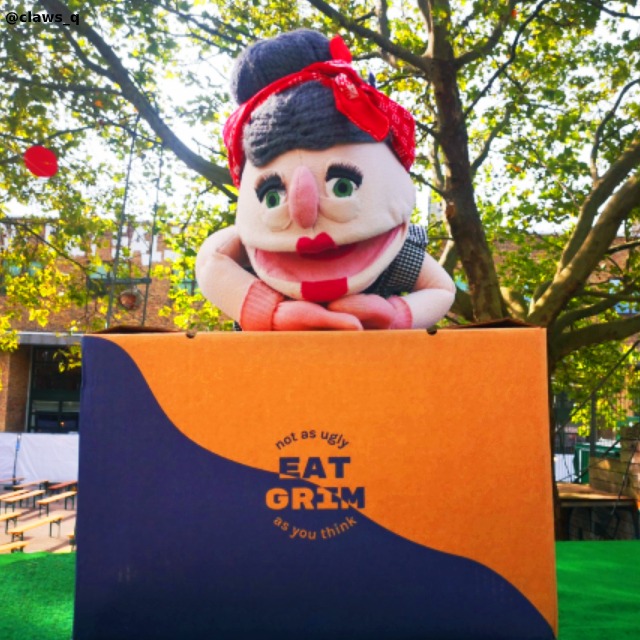 Hey there! A GRIM box with organic ugly surplus fruit & veg delivered to Grandma Sita straight from the farm 🙌 She got yummy seasonal ingredients to cook new recipes 🍇🥕🍐🍅🍆 From now on, our delicious recipes 😋 can be found on GRIM blog as well as on Sita & Nena recipes.

📢 Discount code: sita-nena 👌 EAT GRIM will give 20% off to your first box – a great incentive to try it out! Check more info about here ➡️ eatgrim.com

In general vegetables produce far less greenhouse gasses than meat and dairy, consume less land and require less freshwater to produce. For inspiration on how to cook with vegetables, EAT GRIM has created a cooking blog. If you want to live even more climate friendly, it is a good idea to pick produce that is grown outside over commercial greenhouse veggies, which often takes up a lot of energy to uphold. On the contrary, transport emissions only account for ca. 6% of the carbon footprint of food. However, EAT GRIM recommends avoiding foods that have a very short shelf-life and have traveled a long way. The best tip they can give: Eat with the season and enjoy produce at its best!

Have you ever wondered what happens to vegetables and fruits that do not pass the supermarket quality standards? A cucumber that does not have the right shape, a pineapple that is too ripe, a pumpkin that is too big and the list goes on and on. But there is a new hero in town! It is EAT GRIM, a company that has created a marketplace for such produce that does not make it to the store because of these standards. They save the ugly (in Danish ‘’grim’’) but still valuable veggies and delicious fruits and creates even bigger and more sustainable impact!

Today 1 out of 3 pieces of fruits and vegetables are discarded because of unfair beauty standards, overproduction and inefficiencies in our food system. That is because European Union has a system that rates the quality of fruit and vegetables according to how perfect they look. What you will usually get in the supermarket is per definition “uniform in size, shape and color”. As a result, produce that falls outside this beauty norm is significantly harder for farmers to sell and results in large amounts of food going to waste. Supermarkets still hold the most buying power and can say no to whatever suits them. Together with consumer’s expectations of how food should look like, 30% (!!) of what is grown is never sold!

EAT GRIM buys whatever farmers normally cannot sell for a fair price and make delicious food boxes that they ship straight to customer’s door. Each GRIM box gives a delicious variety of climate-friendly fruit and veggies to substitute part of the fresh produce customers would usually buy in the supermarket.

Eliminating food waste is considered the third most impactful solution to solve climate change. Why? When you eat a GRIM apple, you remove demand for growing one elsewhere. By bringing produce that would otherwise be wasted, back on people’s plates, EAT GRIM feeds more people without increasing food production and its harmful effects on the planet. The produce in the box is categorized into salad & root veggies, kale & cabbage and Nordic & exotic fruit. They use categorization because there is a significant difference in the climate impact of different kinds of produce GRIM’s cardboard boxes are made of 66% recycled and 33% virgin fiber from FSC certified sources in Sweden and are produced in Denmark. Finding a cardboard producer close to home was important to them. 40% of all boxes get delivered by cargo bikes. That way, EAT GRIM keeps trucks out of town, reduce particle pollution and the climate impact of transporting the veggies. The remaining 34% are delivered by van.

So far EAT GRIM has already proved how much can be done by simply accepting all shapes and sizes of veggies and fruits that are still perfectly fine to consume. Here is a list of the great things they have already helped to achieve:

So The European Union has a system that rates the quality of fruit and vegetables according to how perfect they look. It’s called European marketing standards for fresh fruits and vegetables, and there are three classes: Class “Extra”, class “1” and “2”. Supermarkets typically only sell class extra and 1, so what about “class 2”.

“Class 2” – so all the produce that is still perfectly edible but falls outside this beauty norm – is significantly harder for farmers to sell, because there is no market for it. No market place means large amounts of food going to waste. So all of you out there, let’s be frontrunners when it comes to fighting food waste and get your veggies from EAT GRIM.

Materiale Centralen, One man’s trash is another man’s treasure
GRØNT MARKED, the farmer’s market in Copenhagen